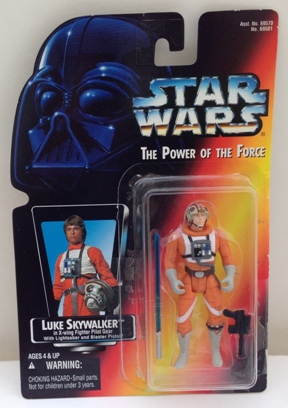 **Please Note “Product Information”: This Action Figure Has a 24+ Years Age Factor and are no longer available from the Manufacture (“Discontinued”), Packaging “May Have” Slight Shelf Wear (Slightly Bent Cardboard Corners, Dents in Plastic Areas, Minor Scratches, Also Some Packaging Clarity Distortment “May Occur”, Due to aging Packaging Only etc). Figure (s) and all assessories inside packaging are perfect and come sealed in their “Original Factory Released Format Packaging”!!

*Luke Skywalker comes a long way from piloting a T-16 when he captains his first X-Wing!

*Growing up on the twin-sun planet of Tatooine, Luke Skywalker had always looked tot he stars. He had been told that his father was a great star pilot, and it was clear that the young Luke had inherited some of his skills. In the arid deserts of the Jundland Wastes, Luke and his best friend Biggs Darklighter, would race their T-16 skyhoppers. Tagging womprats in Beggar’s Canyon or threading the Stone needle, Luke and Biggs were the best of friends, and daring pilots. Unfortunately, they were separated when Biggs went to the Academy, and Luke was forced to stay behind!

*Years later, Luke would be caught up in the Rebellion’s fight against the Empire. On the moon of Yavin 4, Luke was pressed into service as a pilot with one of the assault teams that was trying to defend the Rebel base from the Empire’s dreaded Death Star battle station. Luke passed flight simulator tests and was awarded a T-65B X-Wing fighter, with R2-D2 to fly as his onboard astromech droid. Luke was reunited with his friend Biggs, who was also flying in the mission against the Death Star. Born were members of the X-Wing Red Squadron, with Luke serving as Red Five. Dodging TIE fighters in the space battle above the surface of the Death Star, Luke, Biggs, and Wedge Antilles made an attack to run down the Death Star trench. Darth Vader’s custom TIE and two TIE fighters dogged them, forcing Wedge to veer away. Biggs was killed, and a remorseful Luke completed his mission alone. With the timely arrival of the Millennium Falcon, Luke’s pursuers were scattered. Guided by the Force, Luke fired his proton torpedo into the thermal exhaust port and destroyed the Death Star!

*This collectible Luke Skywalker X-Wing Fighter Pilot commemorates a memorable story line from the Feature Film Movie, Star Wars The Power Of The Force, an awesome addition to your collection!

“Relive all the action from your favorite Star Wars movies with classic Kenner action figures and accessories. Each character and accessory is highly detailed, depicted exactly as portrayed in the legendary film series”.

*Warning – Choking Hazard – Small Parts – Not for Children under 3 years*