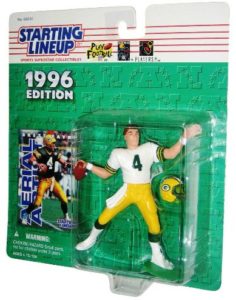 This Brett Favre Figure-Green Bay Packers, was Produced by Kenner! For the “1996″ Edition of Greatest Sports Heroes Starting Lineup 1996 Series! 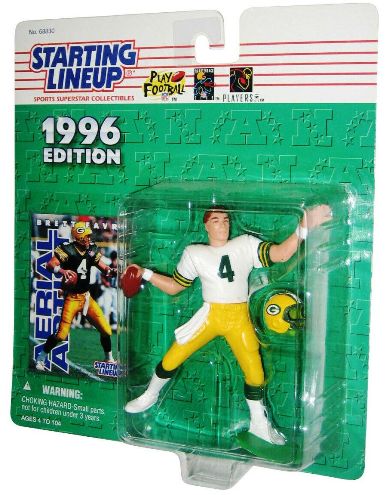 *Please Note “Product Information”: This Action Figure Has a 24+ Years Age Factor and are no longer available from the Manufacture (“Discontinued”), Packaging “May Have” Slight Shelf Wear (Slightly Bent Cardboard Corners, Dents in Plastic Areas, Minor Scratches, Also Some Packaging Clarity Distortment “May Occur”, Due to aging Packaging Only etc). Figure (s) and all assessories inside packaging are perfect and come sealed in their “Original Factory Released Format Packaging”!!**

**NOTE:…Packers | Favre officially calls it a career
Posted on Thu, 06 Mar 2008 09:45:00 from KFFL News
During a press conference Thursday, March 6, Green Bay Packers QB Brett Favre, with a tear rolling down his cheek, officially announced his retirement.
*He said he has given everything he has to give to the organization and while he knows he can still play he is no longer sure he wants to.
*’It’s over,’ Favre said, noting it was very hard for him to say.
*He added he is sure there will be times he wonders if he made the right decision and said he will miss it.
*’I just don’t think I can give anything else,’ Favre said.

*Brett Favre now holds every major career passing record in the NFL. *He just passed Dan Marino as the all time yardage leader on Sunday, December 16.
*Yardage, TDs, Passes Attempted, Passes Completed, Consecutive Games Started for a QB….
*You name it, he now owns the career record.
*And just continues to add to his amazing statistical records.

*This Brett Favre Figure-Green Bay Packers, was Produced by Kenner! For the “1996″ Edition of Greatest Sports Heroes Starting Lineup 1996 Series!